" 'Mike was submitting Biohazardous to various film festivals and realized there was no horror festival in New York,' said Anthony Pepe, a special-effects makeup artist who worked with Mr. Hein on Biohazardous and other projects.

"Mr. Hein and Pepe launched the five-day, Halloween-season festival in 2002 at the Tribeca Film Center. Mr. Hein was festival director and Pepe the programming director. The event screened 30 films its first year.

"Last year it was based at Tribeca Cinemas. With Mr. Hein's death, the status of the 10th annual New York City Horror Film Festival, is up in the air, his mother said."
Posted by Thomas at 2:26 AM No comments:

2011 Viscera Festival to Screen on July 17th in Los Angeles 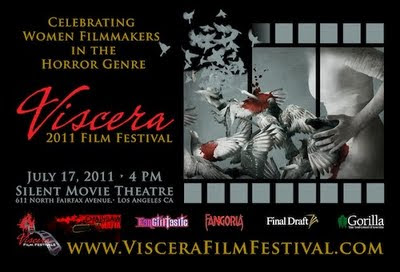 Los Angeles's 405 freeway is closing this weekend -- Angelinos are calling the expected traffic nightmare Carmageddon -- but that hasn't stopped the all-women nightmares at the Viscera Horror Film Festival, scheduled for this Sunday.

Viscera promises "some of the most creative and original new short horror films made by women today. Some are terrifying, some are pulse pounding, and some are hilarious. All showcase what can be accomplished when twisted, cool, darkside-proud women get down to business."

Tickets may be purchased at: Advance tickets

I've seen both films several times, and though produced over 20 years ago, they hold up to contemporary films. Hardware is a powerful and beautiful post-apocalyptic horror/sci-fi thriller, whereas Dust Devil infuses a heavy dose of mysticism to its weirdly horror tale.

Only the latter film was shot in Africa, and Stanley makes effective use of the Dark Continent's unique landscapes.

Celludroid will screen at the Labia Theatre in Cape Town, South Africa. The event runs from July 5-14, 2011.