Calgary Horror Con and the Problem of Unoriginal Horror Films 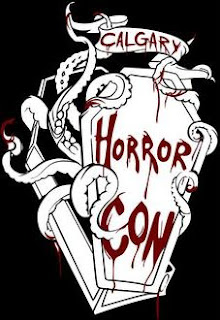 Even so, he adds that "We typically stay away from experimental films." And he has grown "tired" of found footage and generic zombie films.

CHC receives "a flood" of zombie films, but rejects many "because if you're not a true horror fan, your film lacks sincerity. Most zombie submissions are neither original or interesting." Doherty likes The Walking Dead, yet "their fan base are not necessarily horror fans, so the ones making zombie films, for the most part, are just jumping on a trend."

The two determining factors in selecting winning films are story and the technical elements. "Ninety percent of submissions are the same gag, over and over again, with nothing added for originality." If your story is unoriginal, Doherty advises to add some unique element to "make it your own."

Such as last year's Best Short winner, Night of the Slasher. "While its story was pretty typical for the subgenre, it was entertaining and had its own little twist. The slasher wore a painted white Leonard Nemoy mask, whereas in Halloween, Michael Myers wore a white painted William Shatner mask."

A good story can "carry" a film despite its technical flaws. "I loved H.G. Lewis's Two Thousand Maniacs because I loved the story," said Doherty. "The effects were not at all believable. He used paper mache for severed heads."

The reverse is also true. Superior technical elements can help compensate for an unoriginal story. Again, while Night of the Slasher "was nothing we hadn't seen before, it was done so well, from casting to cinematography."


Regarding technical elements, "Can your audio stand up to any feature you see in the theaters? If you use digital FX, does it fit the movie? You don't need a high end camera, just know how to use the one you got. You don't have to be a professional to know about filmmaking -- camera angles, types of shots, lighting, sound, music."

Found footage films pose an additional critical challenge during the judging process. "Where is the line between found footage and shitty camera work?" asks Doherty. Is the filmmaker hiding his incompetence behind the found footage style?

The Calgary Horror Con is in its 7th year. "We screened films from the beginning, but were not a true film festival until the last four years. We are the first convention in Canada dedicated to horror, and also the largest -- with over 800 films submitted annually from around the globe, then narrowed down to 16 hours of screenings." 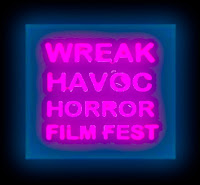 If you want your horror film screened at the Wreak Havoc Horror Film Festival, it should be fast paced, not sluggish or dull.

"The biggest mistake of filmmakers is that their films are boring," said Wreak Havoc HFF director Dan Sellers. "Many of these films are slow paced, don't have a strong point of view, and lack entertainment value. Our award winning films are enjoyable. They're fun to watch."

Wreak Havoc is currently accepting films for its third edition, to screen this September in Greensboro, North Carolina's Carolina Theater. Its first edition had been in Wadesboro, NC. "Where they filmed Evil Dead 2," says Sellers.

"You can tell in the first few minutes of a film if a technical area is bad, be it sound, photography, or lighting," said Volland. "If your film is noticeably weak in one area, it draws you out of the film and into critique mode. You lose the story because it doesn't feel real. And that one bad area will most often be sound. A lot of new filmmakers overlook sound."

Volland also recommends that filmmakers invest a lot of time on pre-production. "Unfortunately, many people who love horror films acquire a camera thinking they can just run out and shoot a film, with no pre-production or planning. The good films benefit from good pre-production, a good crew, good post-production, good actors, and a little luck."

That's to be expected. Because features require more effort and expense than do shorts, fewer features -- much less features of quality -- are being made than are shorts. So if you're working on a horror short film, yours must be extra impressive to perform well on the festival circuit. Plan well, and pay attention to your sound recording and mixing.

Finally, Volland wants to see more horror films like they made 'em in the 1980s, "when the plot was thrilling and the scares were big."