Denise Gossett Looks Back on Shriekfest 2012 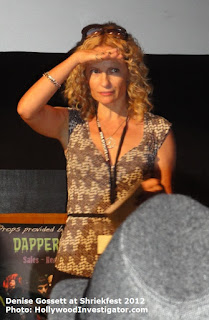 "There were quite a few zombie films, still. This never seems to wane. And quite a few ghost films/scripts.

In light of the Twilight film series' recent success, the dearth of vampire entries is surprising. Perhaps so many horror filmmakers are instead tackling found footage films because it's a structure that seems cheap to produce, and easy to pull off?

If you entered Shriekfest this year, and your film wasn't selected, remember that the competition is fierce. Gossett reports that "We accepted 26 short films, 10 features, 20 feature screenplay finalists, 10 short screenplay finalists, and 10 original song finalists. It's always extremely hard to win."

What separated the winners from the losers?

"So many good films were submitted that didn't make the cut because they weren't tight enough in the editing department." says Gossett. "Just because you shot it does not mean you need to use it. If it doesn't forward the story, cut it out.

"Start with a strong story, and don't start shooting until you have one. Really flesh out your stories. Find your passion in each and every project.

"The acting can hurt a film too. Audition your actors, and keep shooting until you get what feels authentic.

"Make sure you light properly. Don't let small errors pull us out of your story."