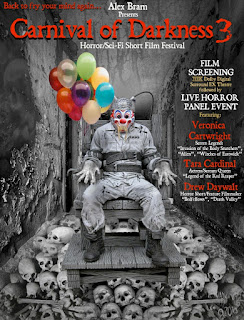 I asked festival founder and director Alex Bram if any trends dominated this year's submissions?

"We had two unicorn films," said Bram, "and two films where the girl who seems to be running from the bad guys turns out to be the bad guy in the end.

"There's always a lot of zombies. And folks always want to buy a camera, film themselves naked, and send that in to me."

None of those nudie films were selected, so if you hope to screen at Carnival of Darkness in 2013, it's probably a good idea to keep on your clothes (at least on camera).

Bram reports that he received "over 200 submissions." Of those, 14 films were screened. The festival has only one award -- the Thrill Ride Award -- so naturally, only one film won.

What single element tanked most submissions? "Acting," said Bram. "Always the deal killer in many films, and the number one reason I have to reject films.

"Folks, move to L.A. or New York if you want to be filmmakers. It's not that you aren't brilliant cinematographers or sound designers or writers. That part is very democratic, and you can nail that no matter what part of the world you live in.

"But if you are an otherwise brilliant filmmaker living in Montana, and it comes time to cast your film, you will have a much more limited pool of actors to pick from. People end up casting friends and family, or people in their local theater programs.

"I'm not being snobby. It's just simple math. Even in Los Angeles, which is crawling with actors, it's still a challenge to successfully cast a film. This is the cold, hard fact, folks. Sorry."

There's one other thing that Bram wants in a short horror film: "I always look for suspense, which is an art."

Posted by Thomas at 3:03 AM No comments: