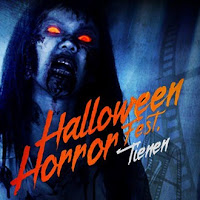 Tienen is in Belgium -- and the Halloween Horror Fest Tienen is the first horror short film festival in that European nation. As the name implies, they screen on Halloween night. This year marks their second annual event.

* Be original. Give the audience something they haven't seen yet.

* Choose one location for your film.

* Work with a small crew. The smaller, the better -- and faster.

* Limit the amount of dialog.

* Use the right lighting on set.

* Never forget the importance of a great sound design for your horror film. Sound is as important as your images.

* Listen to what the audience has to say and wants to see. You want your movie to be seen [and enjoyed, and talked about] by horror fans out there.

* Stay away from the zombie genre. We've seen way too many zombie flicks. If your name is George A. Romero, then go for it. Otherwise, make something else.

The Gorst Underground Film Festival debuts this year, backed by experience. "Our organizers have been involved in other film festivals, both horror and underground," says festival director Kelly Hughes.

"We created Gorst to incorporate local artists and musicians into the event. To make it more multimedia, while still exploring darker themes and alternative approaches to filmmaking."

"We love the underdog," says Hughes. "It’s very satisfying to showcase films that aren’t getting the attention they deserve.

"I would love to see more real-life horror. Documentaries on scary individuals or happenings. Documentaries about horror films and people associated with horror (e.g., actors, composers, writers, directors, SFX artists, etc). "Documentaries such as Never Sleep Again: The Elm Street Legacy. There’s room for docus like that, but which cover even more obscure aspects of horror and underground film.

"We’re open to ultra-low-budget/no-budget works. Films that are rough around the edges."

* Tips to Improve Your Craft

Hughes recommends that you "Put the fantasy back into dark fantasy. Take advantage of the freedom horror gives you. Get surreal. Go hallucinogenic.

"Re-watch all the movies that inspired you. Remind yourself about all the elements that got you excited about these films. Use those elements, but put your personal spin on it."

"Just dive into your film. Save the credits for the end."

"Be brutal with editing. Maybe your two hour feature can be 90 minutes? Maybe your feature would be stronger as a short? Even then, shave off a few seconds from every cut? Maybe you can delete entire scenes? Or cut to the middle of a scene?

"Many beginning filmmakers pose their actors in shots like it's a still photo. If you're drawing attention to a 'cool' shot, you probably aren't advancing the story. Make your action so compelling that we don't even notice your beautiful lighting, production design, whatever.

"Get over the fact that you can create a workable image. Get back to telling a story that is constantly progressing and offering new information. Think in terms of a series of useful connecting shots, not a slide show of money shots."

"Some filmmakers use it as an excuse for lazy filmmaking. Don't. If you achieve a sense of dread with gradually building suspense, more power to you. But don't defend your slow-moving story with the 'it’s a slow burn' excuse. It's not a slow burn. It's just slow. And boring."

"Why do Lovecraft inspired films always end up unintentionally silly? It's not the filmmaker's fault. Lovecraft is a big tease. His literary 'payoffs' don't translate well to screen. If you want to adapt his work, go ahead. Maybe you'll be the exception. Maybe you'll crack the Lovecraft code."

"Go ahead. Use 'em. But they're approaching cliché status through overuse. Sorry. Try shocking us with piano music. Or bagpipes. Or xylophone, even."

"If you have access to a wall covered in colorful graffiti, resist the urge to shoot a random shot of your actor walking past the gratified wall. It's self-indulgent. It adds nothing to your story.

"To achieve a sinister, horrific, kinky vibe, resist the urge to cover your actor's head with a big bunny head, or a big pig head, or even a slick black gas mask. These have all lost their shock value. Show us a villain with pantyhose pulled over his face. Or just give him crooked teeth and a wonky eye. The fetish dungeon look is so cliché."

"Never start your film with an alarm clock going off. Not even ironically."

Why makes Gorst unique among the many horror film festivals out there? "Gorst is true Northwest Noir," Hughes answers. "It's a small community at the edge of Bremerton, near the Naval shipyard. A working-class town with steelworkers and an authentic blue-collar sensibility.

"Seattle is just across the water, but it feels like it's a thousand miles away. Gorst has that authentic Twin Peaks vibe. There is nothing ironic or self-conscious about it.

"We'll be screening our films in the warehouse workshop of metal artist Ray Hammar. It's a remote location. The space has an industrial feel. The audience will be surrounded by iron rods, steel beams and scrap metal.

"We'll have an art show, musical performance, reading of the winning screenplay from our writing contest, and a welding demonstration. But the films themselves will take center stage on a specially-built screen/set-piece created by local metal artists.

"This warehouse would make a good setting for a horror film. As the sun sets, the later screenings will take on a more immediate, spooky tone. Every little sound will make you think there's a killer hiding in the shadows behind the clusters of rusty metal. And since there's a women's prison not too far away, who knows? Maybe we’ll get a surprise visit from an escaped murderer." 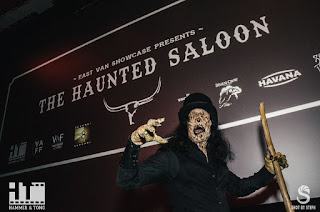 The Haunted Saloon will hold its 3rd annual screening on October 21, 2018, in Vancouver, Canada.

"We want horror with a brain," says James Kingstone. So make it smart. And while he welcomes all subgenres, some might have an easier time getting in.

"We see a lot of 'monster in the house' movies. We get that it's easy to shoot, but it certainly is over-saturated at this point." One subgenre that's especially welcome is the Dark Western. "We are the Haunted Saloon, after all."

* Nerd it up. Learn what is going on in horror.

* Be mindful of maintaining suspense.

* Don't show the monster too much.

* Get the right sound design. Sound is a great worker. Without it, that "horror feeling" is tricky to create.

"Our trophies are terrifying and custom made every year," said Kingstone. "The Rio Theatre is a classic location, complete with alcohol. It holds over 400 people, so we can really pack the house. A lot of people dress up in costume. We even have a contest at intermission.

"East Vancouver does Halloween right. We are a bunch of horror loving cinephiles." 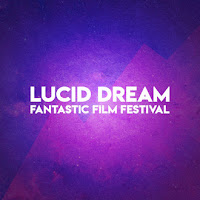 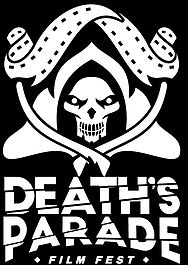 New horror film festivals are always debuting. One of these is Death's Parade in San Jose, which will hold its first even on October 4th and 5th, 2019.


"Because this is our inaugural run," says founder Anthony DeRouen, "the theme will be inspiration. This will be reflected in our selected filmmakers' bios." DeRouen wants filmmakers to explain "What excites you? Show us what drives you to create that wonderful, terrifying, insidious art you make."

Death's Parade welcomes every horror subgenre. Just be scary. "We want to scare the audience --and I mean scare them. We want to get under their skin, get those beads of sweat going, subvert their expectations, show them something fresh and original. We want to expose the audience to creators and voices outside the norm. If we receive a submission completely out of left field that gets our palms sweaty, we will give it serious consideration."

But though DeRouen wants "fresh and original" horror (don't we all?), he doesn't want to discourage anyone. "Don’t be afraid to make a film which has elements done before. If you have a fresh spin on a well-worn trope, explore it, probe it, expand it. Combine elements not usually seen in horror and flip it upside down. What happens when you do? We have no idea, but we’d love to see."

Even so, Death's Parade has some limits. "No adult films, please."

DeRouen stresses the importance of finding talented actors, willing to commit to the material. "It doesn’t matter if the actor has ten credits to their name or none. The audience is not going to judge their IMDB page. They are going to judge the actor's performance on screen and nothing else. Find actors willing to embody the characters you created and lift their emotional levels to heights you couldn’t imagine."

Posted by Thomas at 9:32 AM No comments: