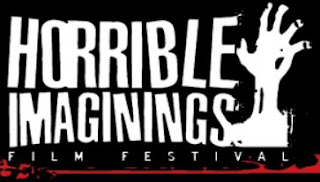 Horrible Imaginings screened most recently in September 2016. They're now preparing for their 8th event in 2017, even as they host "year-round monthly screenings in San Diego."

* Horror with a Personal Vision

Like the Great Pumpkin, festival director Miguel Rodriguez believes that "The most important element of any film is sincerity. Horror is the most personal and sincere of genres when done well -- honest appeals to our fears, or expressions of the film makers' fears." Thus, his festival seeks "to showcase the inherent eccentricity and variety within the macabre -- to expand typical definitions of what makes horror.

"Our program can be extremely eclectic. A film on the periphery of horror has a chance of acceptance at ours that it might not have at another horror festival."

Which is to say, low-budget oddball horrors -- it they convey a strong personal vision -- have a better chance of acceptance than slicker, more traditional horror films that lack soul. (Or sincerity, as Rodriguez might put it.)

"Anthology films have less chance of acceptance -- not no chance, but less of one," says Rodriguez. "In a festival with short film blocks, an anthology can feel like just another short film block, taking up a feature film slot." Especially if each segment in an anthology film has its own director. "Films like Tales of Halloween, Southbound, and XX are not like the old days of Black Sabbath or Creepshow or Tales from the Darkside: The Movie, all of which had one director and a unified feel."

While Rodriguez won't discount any subgenre, like other festival directors, he's tired of some. "There are still an over abundance of '70s grindhouse throwbacks, which started churning out after Tarantino/Rodriguez's film. But I was also tired of zombies. Then we get a Pontypool or a Train to Busan or a Girl with All the Gifts, and I feel the joy of proving myself wrong. So I try not to think of subgenres as being played out, and focus on each film individually."

* Tips for Getting It Right

Rodriguez recommends that filmmakers always be making films. "Even if with just a few friends and a cell phone every weekend. Then show it to people, get feedback, and make another. Many filmmakers want their first film to get into all the festivals and get all the attention, but filmmaking is a skill and a craft that is honed with practice.

"And watch films. Voraciously consume the cream of the crop, and incompetent films as well. The horror filmmakers I see doing some of the best work are able to have obsessive conversations about The Red Shoes, Seven Samurai, or Midnight Cowboy every bit as much as about films like The Beyond, Nightmare on Elm Street, or Night of the Living Dead. Become entangled in the unique and potent language of cinema, and how you can use that language to make an audience feel something.

"I was conversing with a guy who made a zombie movie. I mentioned Lucio Fulci. He had never heard of Fulci, so I gave him some recommendations. He said he didn't want to watch them because, in his own words, "I want to stay original." Unsurprisingly, his film was an unwatchable turd. Not seeing movies does not protect you from unoriginality. It just makes you ignorant, and unable to even identify when you are being unoriginal.

"Surround yourself with people who are the best at their jobs. Make the other creatives working on your film -- actors, cinematographers, composers, sound engineers, etc. -- truly understand and become unified behind your vision. An audience should not see separate parts, but one whole piece of art called a film. The director's job is to make the parts come together coherently.

"Some microbudget filmmakers defend their works by saying, "Yes, I know the sound was not so good, but I am proud of the script." Or they point to a couple of strong points, as if those should be enough to overcome glaring flaws elsewhere. That doesn't work. The finished film needs to be the best it can be of everything."

"Lack of purpose is mistake number one. It leads to other big mistakes, like a weak script and too many clichés. There is something exciting about having a finished film with your name on it, so many people make a film for that reason. The only good reason for making a movie is you have a story you are yearning to tell, and cinema is how you want it told. Why that story? What does it mean to you? Why is it important you share it with other people? A filmmaker should be able to answer all of those questions with vigor and passion."

Other mistakes include "technical problems like poor lighting, sound, color, and incoherent editing. (Especially for horror, sound is critical. Do not cheap out on your sound engineer. Sound is 80% of your film's effectiveness.) This is important even for microbudget films. Audiences don't care how much you spent on a film. They just want the film to transport them. If they get that experience, then learning a film was made for five grand might impress them, but they won't feel impressed if the film fails at that mission.

"Some filmmakers who finish a film for zero money feel entitled to a screening just for finishing a film at all. Unfortunately, there are thousands who that did the same thing and that entitlement doesn't exist. Their accomplishment is worthy of respect, but they should keep growing and improving."

Posted by Thomas at 2:37 AM No comments: