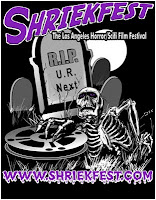 The Los Angeles based Shriekfest horror film festival hosts a monthly networking meeting. Well, they meet most months -- and that includes this month!

Their next meeting is scheduled for Tuesday, June 28, 2011, 8 p.m. If you plan to attend, Shriekfest prefers that you RSVP them at shriekfest@aol.com so they can plan ahead.

Shriekfest says "We will have the upstarisl all to ourselves." They add that details can be found on their website.

"The 2011 Illustration Contest will be based on the iconography of this beloved film, which left us an unforgettable lesson: Never pass the weekend in an old cabin in a solitary forest -- something really bad can happen to you!

"The regulations are posted on our website. Anyone can participate. The deadline is August 7th.

"This year, the fourth edition of our Fantastic & Horror Film Festival from Santiago, FIXION-SARS, will occur between October 11th and 16th in Cinemark Plaza Vespucio and Cineteca Nacional. With all the usual sections, plus some surprise that we are preparing.

"Regarding the 2011 call for submission of audiovisual works, this will be open from early July and the deadline are planned through mid-August -- so there is time enough [to submit your films]!"

The 2011 Tabloid Witch Awards are returning to Loscon, the Los Angeles Science Fiction convention, which has for many years convened every Thanksgiving weekend at the LAX Marriott Hotel.

This year's Tabloid Witch Award-winning films will likely screen on Friday and Saturday nights, November 25 and 26, 2011. Filmmakers will participate in panels and Q&A sessions with Loscon attendees.

The Tabloid Witch Awards is a No Entry Fee horror film contest and festival, sponsored by the Hollywood Investigator.

Now, the New York City Horror Film Festival joins their ranks. On June 7th, the NYCHFF will release Devil's Grove on DVD -- co-directed by NYCHFF founder Michael J. Hein -- which the festival describes "as one of the most brutal independent horror films in recent years.":

"I sincerely appreciate the plug for Devil's Grove on your recent blog, but just a correction that I have been working in the film industry for 25 years and my Directorial debut was in 2000. The NYCHFF is an event I founded ten years ago to give back to the genre community which I'm so heavily involved in. For a decade, not one person involved with our event has taken a dime of salary (including myself). So no one involved with the NYCHFF has ever used the event to catapult into anything and I was the only one involved in the making of the movie involved with the festival. (Everyone else evolved are Ohio filmmakers.)

"The new label is set up to help filmmakers get an honest, reliable, distribution deal. To test the waters with the concept, I put a film that I own a share in first to see how it works. In other words: I'm my own guinea pig.

"You're correct on one thing though: Devil's Grove is a straight up grindhouse torture flick and definitely NOT for everyone’s tastes. A fact we are pretty proud of. Thanks again."