Negative Image is about a paranormal journalist who tries to catch an supernatural entity on film (sounds a bit like the J-horror film, Silk).

The film is from Darkline Entertainment. Its director, Karl Holt, also gave us Eddie Loves You.

Posted by Thomas at 9:53 PM No comments:

Not only is Bryan Wolford the man behind the Drunken Zombie Film Festival -- he's a filmmaker in his own right! (Yes, another filmmaker/festival director.)

Wolford has produced a trailer for his upcoming horror film, Whisper: 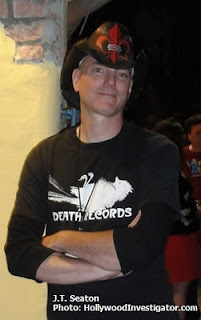 JT Seaton is the latest in a growing line of filmmakers-turned-film-festival-directors, an especially common phenomenon among horror film festivals. I learned this from Seaton at the 2011 Shriekfest horror film festival, which screened his short film, Divination.

The latter was to have its first screening in 2010. Its plans were destroyed by the BP gulf oil spill, and plans for a 2011 screening apparently never materialized.

Horror Film Sound -- How to Do It Right 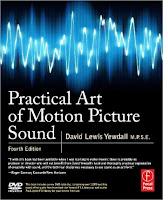 Since 2005, the Tabloid Witch Awards has honored film sound with a Best Sound Award. This is because sound is an often under appreciated element in filmmaking, and so the Tabloid Witch wishes to highlight those films that put sound to good aesthetic use.

Now there's a book that will teach horror filmmakers just about everything practical and "how to" about how to create, record, mix, and edit great soundtracks. Read our review of David Lewis Yewdall's Practical Art of Motion Picture Sound.

Yes, the book's expensive. But at least read the review before deciding on whether this book might help you with your future projects.

Here's a blast from horror's past...

Today Screamfest L.A. is the largest horror film festival in Los Angeles. A glitzy, high-profile event with Hollywood support. But back in 2001, at its first annual screening, Screamfest L.A. was still a small event.

A forerunner in this past decade's horror film festival boom, that first annual Screamfest was something of a historic event (at least for anyone who cares about horror film history). I'm proud to say I was there, reviewing those early Screamfest films for Horrorfind.com.

Ten years is a long time on the web, and Horrorfind has long since removed its film reviews (including mine). But now my report on the first annual Screamfest L.A. is available once again -- at Communist Vampires.